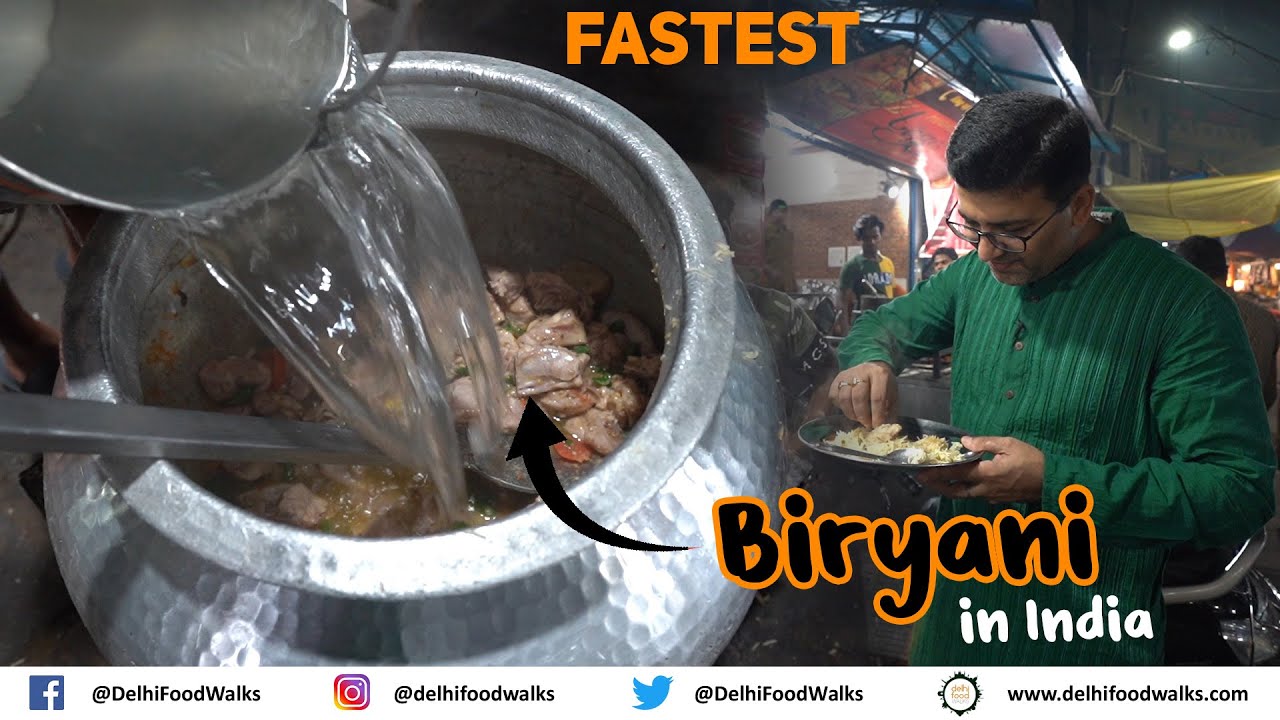 The area surrounding Nizamuddin Auliya Dargah is one of the oldest areas of Delhi. Originally it was called Ghyaspur but then it was renamed after the famous Sufi saint Nizamuddin Auliya. The sacred place is surrounded once by narrow lanes and bylanes which are lined by numerous eateries selling lip smacking kababs and korma.

Since it was Ramzan, before embarking on a brief food walk we paid our respect at the dargah and then joined thousands of devotees for iftar. Partaking this simple meal of fruits, juice, biryani etc. with other devotees was a surreal experience.

The first stop of our food walk was Majid bhai’s biryani. Here we tried the Muradabad biryani. It is a light yet spicy kacchi biryani that is flavoured with lots of green chillies. It is definitely one of the must try dishes over here.

Next stop was Lazeez hotel where we tried a unique Chicken Changezi. Unique because its gravy is slightly different from the one we Delhites are aware of. Here they use cashew majag onion tomato masala and the resultant taste is smooth and rich feeling.

From there we headed to another legendary place called Hussaini Hotel. We had intended just to try their nihari but ended up having kabab, korma and nawabi kheer. The kebab were truly toothsome.

After Hussaini it was the turn of another legend Ghalib Kabab Corner. This place is renowned for their kababs. Our pick was chicken and mutton seekh kebab. The first one was tasty but a little dry compared to the second one.

The penultimate stop was Nasir Sheermal. They sell a fascinating range of new age Sheermal that are more buttery, crusty, soft, crumbly and luscious than the original fare. Our pick was badam sheermal that had a generous amount of slivered almonds on the top. It is again a must try thing over here if you are a bread lover.

The last stop was Sultani Halwa Paratha. This dish is an identity of this neighbourhood hence our food walk would have been incomplete without trying it. Although there was a great amount of ghee and oil in the halwa and partha, the taste was very homely.

So if you are a foodie hankering for traditional flavours, do visit this place for a memorable experience.

About the host – Anubhav Sapra

Anubhav Sapra is an avid culinary explorer who loves to travel and explore different cuisines primarily the street food, not just for the sake of gustatory pleasure but also for quenching his deep thirst for nurturing new cultural connections through the kaleidoscopic canvas of food. He believes that the vibrant and delectable street food tradition across the globe has the power to bring communities together and foster harmonious human existence.

For more such fascinating culinary explorations and stories do subscribe to our channel and follow us on our social media handles.

Design and filmed by Rahul Singh